I just can’t seem to stop creating fish ceramics.  Here’s the latest creation, still pretty fragile, in the process of hardening (greenware stage).   Notice I’m using ‘fish wrap’ to cradle the piece while it is drying. 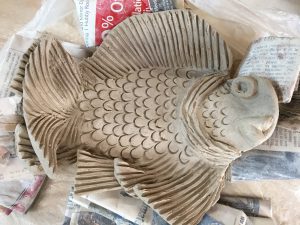 Below is a smaller fish which just survived bisque firing, and now ready for glazing. 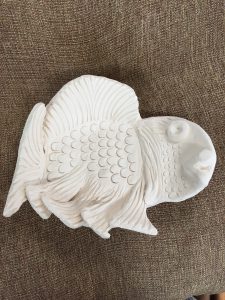 This Summer has started out auspiciously — with a rare “Strawberry Moon.”  A full moon shone on Summer Solstice (June 20) — the longest day of the year.  Hasn’t happened since 1967, and we all know what a great year that was!   Won’t happen again until 2062 — pending intervening unknowns.

So, I’m trying to make Summer plans that are equal to this auspicious start, involving heretofore unknown feats involving ceramics.  I was inspired by attending “Open Studios” last month, in particular one artist who recently switched from 2D (painting) to 3D (ceramics) and was cranking out some amazing work.  Since then, I have begun some cranking out of my own: 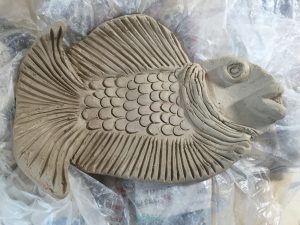 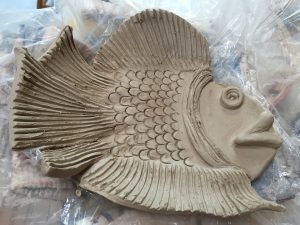 Shallow Serving Bowls — with enough breadth (11”) to accommodate my propensity to carve carve carve.  The first pic reflects my favorite ceramic subject which is fish.  The second pic reflects another of my favorite things, words. The idea of carving words was inspired by an acquaintance who was spouting off about people really liking things (artwork) with sayings on them.  Plus, I was enamored with Ms. Bockle’s words in a recent MoveGirlGO post which I paraphrased . . . 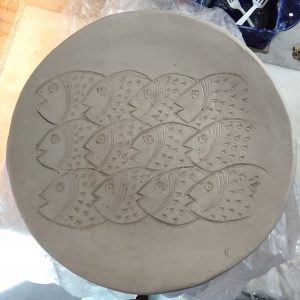 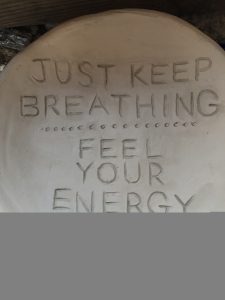 I’ve got loads more clay on hand to keep me busy for the rest of the Summer, and hopefully I’ll continue to “feel my energy rising.” 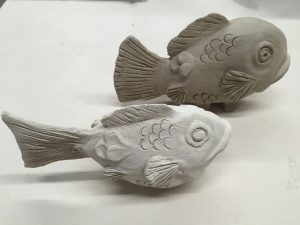 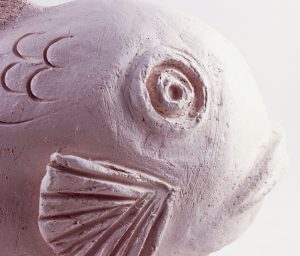 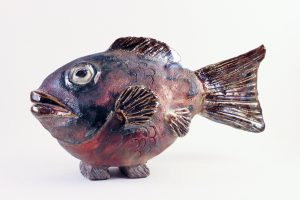 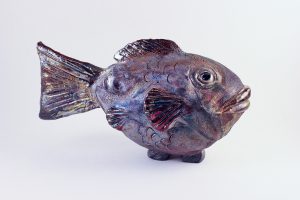 Visit the Legalize Pottery Shop on Etsy.com to view a bevy of Fish Dishes, plaques, and boxes! 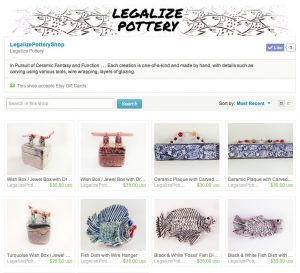 Quite some time ago, I made a whimsical Fish Dish with multiple fins, elaborate tail, gills, scales, big lips and eye.   Multiple carving tools were used to create texturing and crevices.  Cobalt Blue Oxide was applied for highlighting the various features, red iron oxide was used on the lips.  Celedon glaze was brushed on.  (Hand-built from High-Fire Porcelain, dimensions are 7″ x 4″)

A few months later, this same Fish Dish was cloned, and became something entirely unexpected.  That is, my niece created a beautiful 2-D image of this Fish Dish, somehow transforming it into a piece of framed artwork.  My niece is not divulging the techniques for making this beautiful image, although there appear to be some watercolor elements.   All I know is — somehow my work was transformed into something else which can be considered to be true art.  I love this piece times two! 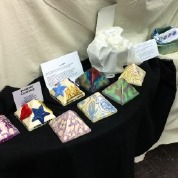 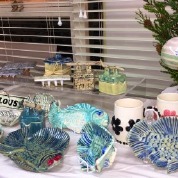 The December Ceramics Show & Sale at San Mateo Central Park was a great place to display many of my latest creations, like Christmas ornaments, driftwood-handle jewel boxes, pyramids, and black/white fossil fish.  The 2-day show was well-attended and loads of fun for everyone!

As usual, I skipped the Summer Session of my ceramics class, and instead worked on my own. Also as usual, accomplishments fell short of the goal, and there are only a few finished pieces so far, and fewer still are worth sharing.

 
I spent most of my time slip-casting and trying to alter the results into something unique. I acquired several different molds and 4 gallons of slip, and spent lots of time/effort making the pieces ‘artsy’ rather than ‘crafty’ BUT not quite there yet. 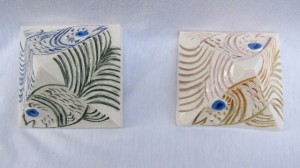 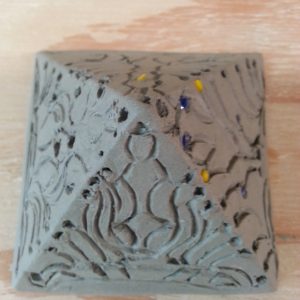 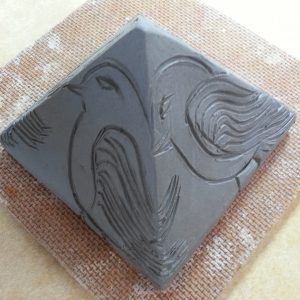 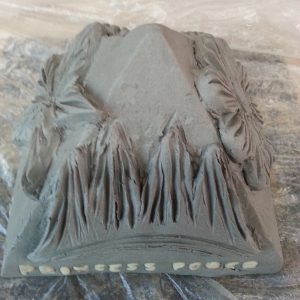 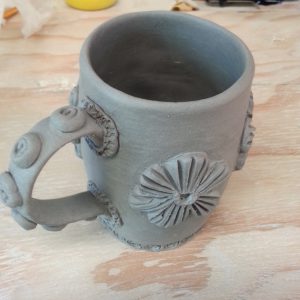 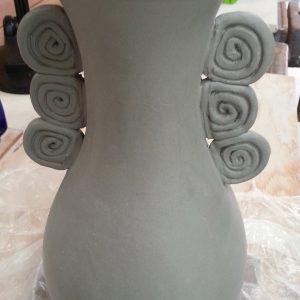 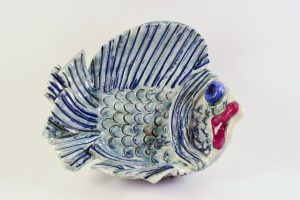 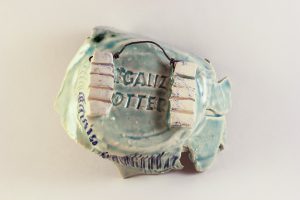 This clever fish is able to morph into a spoon rest, or a soap dish, or a sushi dish, or a candy dish, or a nut bowl, etc.

AND, there’s a wire attached on the back, so it is able to hang out on your wall!

Finished with copper carbonate and cobalt carbonate in the crevices, and bright-colored underglaze on the lips and eye.  A light turquoise glaze was brushed overall.  Lastly, a chip of blue glass was added to the eye, which melted to create a great effect.  Cone 5-6 white stoneware, 5-1/2” long, 4-1/2” wide, sides about 2” high. 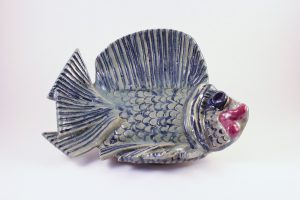 A unique and fantastical fish with exaggerated fins and hand carved textures.